As I was working on some of my Christmas 2018 blocks, I had an idea.  I think it was a good one! The trees are cut from a piece that starts 7" wide. I had some big chunks left over from last year's Christmas quilt. I experimented with using up the chunks as strings...I like it!! I am going to do the same with the large red innermost blocks when I run out of the ones I have already cut. I think it adds a lot of interest to the quilt, and it's more who I am. What do you think? 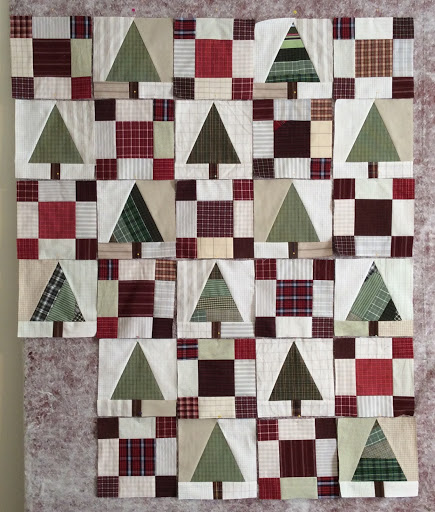 I got the idea from the block in the above picture that is the second row down. The second Puss in the Corner block has a pieced red center. The piece I had left over from cutting other blocks was a-l-m-o-s-t big enough. I added just a tiny corner to "stretch" it. That's when it hit me--I could do the same with the greens I had left for trees.